93QUEEN is the empowering story of Rachel “Ruchie” Freier and the efforts of her team of powerful women to go against the deeply ingrained gender roles of the Hasidic Jewish community and create the first all-female volunteer ambulance corps in NYC. In what documentarian Paula Eiselt calls “a Hasidic variation of the Me Too movement,” the women’s struggle to defy a community that is almost completely against their mission is radical and inspiring. (HM: 4/5)

In Borough Park, Brooklyn, the largest ultra-Orthodox community in the United States, the most widely used ambulance service is Hatzolah, a force composed exclusively of men. Many women in the community, who have never so much as held hands with anyone but their husbands, are faced with an uncomfortable situation in the event of an emergency. Often, especially in childbirth, they have to be physically vulnerable with the male technician. Deciding that women should be given another option, a team of exceptional women within the community, led by no-nonsense activist Rachel “Ruchie” Freier, set out to create the first all-female EMS, Ezras Nashim.

Freier is a force like no other, and much of the film focuses on her life as a mother and lawyer, while simultaneously keeping Ezras Nashim afloat, and running for a Brooklyn judgeship. In her struggle to accomplish these feats, she has to endure persecution from her peers, online trolling, and petty business sabotage, but through it all she bores on with grace and righteousness.

Filmmaker Paula Eiselt, who is herself an Orthodox Jew, paints an empowering portrait of Ruchie and Ezras Nashim. She acts as both the director and cinematographer of 93QUEEN, which gives the pieces of the story she tells a more honest perspective, and makes the interviews feel personal and organic. Since she doesn’t shy away from drama, the documentary is fast moving and never boring, and I was able to connect with the women of Ezras Nashim in their personal interviews that highlighted their own stories and reasons for joining the team. Although Ruchie’s overpowering leadership caused a couple people to get lost along the way, I still felt satisfied with what I did learn along the way.

I’m hesitant to call this film feminist, since that word doesn’t seem to hold any relevance within the Hasidic community, but to say the least, it screams girl power. Even if you can’t directly relate to Ruchie’s struggles in Borough Park, the story is incredibly inspiring for any woman who has been told she can’t do something because of her gender. Ruchie’s success in breaking gender roles and proving sexist expectations wrong, all while maintaining her traditional duties of raising her kids and taking care of the family, and wearing heels, proves that a strong woman can do anything she sets her mind to. I shed a couple tears at one point, and then left the theater ready to pursue my dreams. 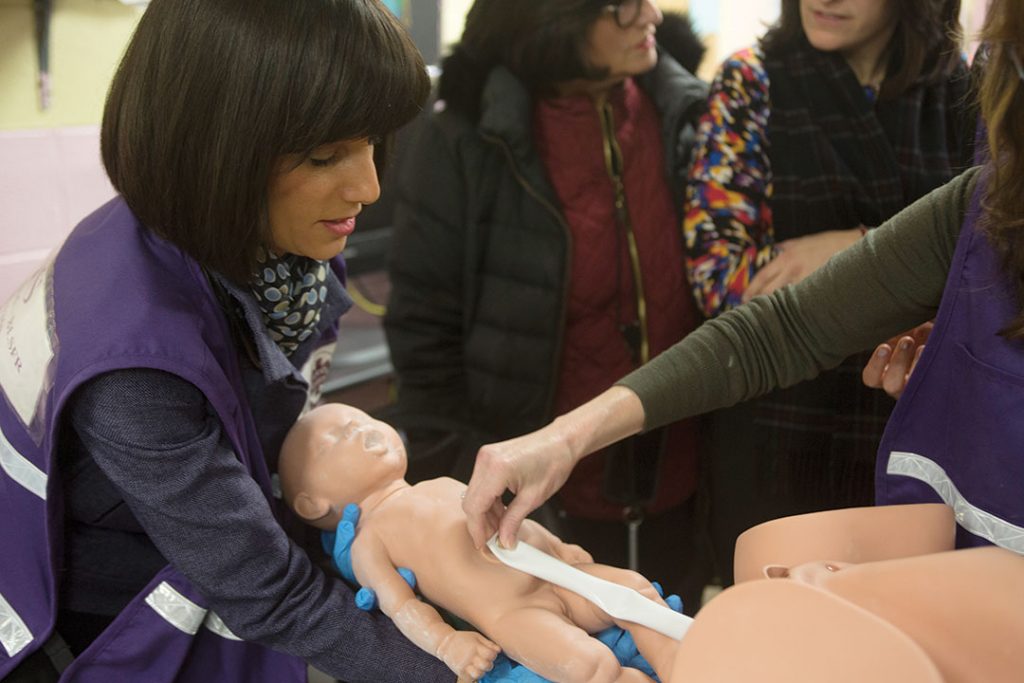 Photos: Ruchie and her team practice working with births.