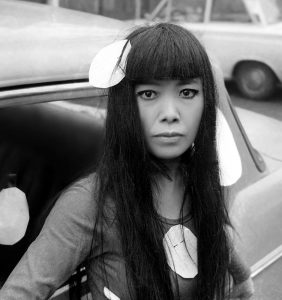 Artist Yayoi Kusama has spent a lifetime creating original work that pushes the boundaries of contemporary art. In both the U.S. and Japan, she has fought for her place in a conservative artistic community that has refused to acknowledge her brilliance. In her documentary, director and writer Heather Lenz – along with writer Keita Ideno – captures both the inner and societal struggles of Kusama, inviting the audience to experience the art that is only beginning to receive the attention it always deserved. (RMM: 4.5/5)

Born in 1929 in Matsumoto, Nagano Prefecture, Japan, artist Yayoi Kusama was the youngest of four children in an affluent yet troubled family. As a child, she was often sent by her suspicious mother to spy on her father’s extramarital affairs. Such experiences coupled with the physical abuse she endured at the hands of Mrs. Kusama contributed to a lifetime of mental distress, depression, and both contempt for and obsession with sex.

From a young age, Kusama knew she wanted to create. She wrote poems and made watercolor paintings and sketches, drawing on terrifying hallucinations of endless dots and flower fields that would lay the foundations for her trademark “infinity net” paintings, large canvases filled with black, red, and blue loops of paint, and her recurring polka dot motif. Young Kusama was determined to become a painter and even wrote to one of her heroes, artist Georgia O’Keeffe, asking for advice on how to start her career. O’Keeffe sent a letter in return advising that Kusama move to New York in order to establish herself as an artist.

The years Kusama spent in New York proved challenging though productive, as she spent every day filling new canvases with paint while struggling to get curators interested in her artwork. As both a woman and an immigrant of color, she was faced with the daunting task of breaking into a space predominantly occupied by white, male, American artists. Undeterred, she ventured into the medium of soft sculpture and created the first known mirrored room. The documentary suggests that notable artists Andy Warhol and Claes Oldenburg liked her original ideas so much that they took them for their own. Kusama’s groundbreaking art went, as usual, unrecognized. It wasn’t until the Vietnam War that Kusama received much publicity at all. Standing against the war, Kusama organized a number of nude protests that left her scandalized in the papers. Deemed an indecent attention-seeker, she was rejected from the community that she had worked so hard to become a part of.

During this time, Kusama continued to struggle with mental illness, falling into bouts of depression and even attempting suicide. Her inner demons both tormented her and drove her artistic passion. Finally, she decided to return to her home country. However, soon after moving back to Japan, Kusama found herself frustrated with it’s even more conservative art community in which she was completely unknown. Her parents wanted nothing to do with her, so she checked herself into a mental hospital, and found meaning in the collages she created there. As she entered a quieter phase in her life, Kusama finally established herself as a brilliant artist in the eyes of her critics. A number of retrospective art exhibits dedicated to Kusama’s work revived interest in her art, allowing the art community to recognize the groundbreaking originality of her work. Now, she is the top-selling living female artist in the world.

What makes this documentary great is that it made me completely forget that I was watching to review and allowed me to lose myself in the artistic world and narrative of Yayoi Kusama. Having never heard of her, I was hooked from the beginning. Some of the work that I saw moved me to tears in its striking imagery and dark ambience. Director and writer Heather Lenz, along with writer Keita Ideno, capture Kusama’s artwork in a way that feels natural and unobtrusive, letting her art take center stage, inviting the audience to dive into seas of polka dots and get lost in those far-reaching, hypnotizing infinity nets. The creative team behind Kusama: Infinity is clearly committed to telling this unique and important story, giving the necessary historical and personal context to help us better understand the meaning and origin of the work that has consumed Kusama’s life. Yet these facts, told through narration and interviews with those who knew Kusama, do not steal any of the attention away from her work. Much of the narration is supplemented with video clips, images, paintings, and photos of Kusama herself, showing a larger portion of her work than many people have ever seen, and willing us to understand what we have missed.

Kusama: Infinity achieves exactly what it sets out to do; it not only honors the life and work of Yayoi Kusama, but it also gives them both the attention and respect they deserve. Definitely one worth watching!

Middle Photo: Kusama poses in one of her first Infinity Mirror Rooms in 1965

Bottom Photo: A photo of a 2016 Kusama art installation, featuring one of her signature Infinity Mirror Rooms

This documentary is all about Kusama and her work and features various female speakers who attest to her genius.