Cristina Costantini writes and directs a multi-award winning film Science Fair. Co-directed and co-written by Darren Foster, the film tells the stories of various high school science students. This feature is a “brilliant and quirky” appreciation of the teenage genii that the rest of the world will one day depend upon. (SYJ:4.5/5)

In a world where people come from all sorts of backgrounds, Science Fair unites the supposed ‘outcasts’, also known as the “teenage geeks”. These teenagers participate in the world renowned Intel ISEF (Intel International Science and Engineering Festival), chasing after their one passion — science. Each group or individual creates a product or theory that couldl impact the world in the future. The film opens with the footage of Jack Andraka winning first prize in the 2012 ISEF, and he explains what a huge deal this festival is to young scientist.

And so, we are introduced to Anjali, Kashfia, Myllena and Gabriel, Robbie, Ryan, Harsha and Abraham, and Ivo. Despite coming from different backgrounds and having contrasting personalities, these teenagers have one thing in common—they are all intelligent and passionate about science. For example, Anjali is a “child prodigy” building an arsenic testing device at the mere age of 14. She has a confident and competitive personality that sometimes does not suit other characters. However, she does not mind, as her main focus is her scientific research. Kashfia, on the other hand, is a very quiet student from a sports-crazed high school.Unlike Anjali, Kashfia has a much more reserved personality. Therefore, the task of finding a suitable research advisor proved to be very challenging for her.

Throughout the feature, Costantini and Foster prove to the audience that students across the world who have a passion and knack for science are more than capable of creating something that could be life changing. The process of making the various technology is explained by the individual students, and we follow their process of preparation for each presentation through behind-the-scenes footage on screen. 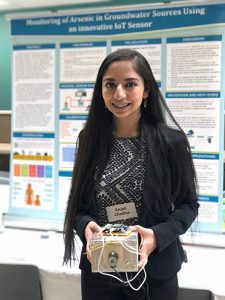 Dr Serena McCalla makes a recurring appearance throughout the film, and is shown as a strict teacher from Jericho High School who guides a group of students in their research and presentation. She is a strong woman, who does not put up with any discrepancies or lack of detail in each student’s work. She is a critical but fair woman who was a respected leading figure in the whole stressful lead-up to the biggest science event of the year for high school students.

Cristina Costantini and Darren Foster’s film created a bond between the audience and each student, especially among the younger audience members. Some may be jealous of their intellect, others may be grateful that the younger generation are not looked down upon. After all, it is the younger generation that will one day run the world. This feature, as well as the concept of ISEF, brings reassurance and hope for the future. The way the film takes footage from each individual’s home life also enables the audience to connect better with the students. For example, Myllena and Gabriel shows Brazil, and the struggle of a foreign language, as well as living in an area that is less fortunate, is shown in their montage. This inspires the audience to  support the students in their quest to find out about the Zika virus, and how to prevent and cure it.

The various sequences of the students’ story fit well within the storyline of the events, and the picture is also full of vibrant colours. As a whole, the film was well done. The various sequences fit well within the storyline of events, and the picture was full of vibrant colors. The film showed stories of success, as well as the journey of those who did not reach their goals. Science Fair is an inspirational feature, taking pride in the successes and innovations of our future generation. Despite some failures, each group’s creations are incredibly illuminating and clever. The students all work incredibly hard for their achievements, and in the montage of their future plans, it is clear that they will continue to work hard and achieve great things in the field of science. The purpose of the film  was to fill the audience with hope and love for these young teenagers and their passion for science.. From this standpoint, I can say that this was a successful project and venture.

Yes! It talks about female student scientists a lot!

by Sophia Jin September 10, 2018
Sophia is currently a student of classical music. She joined FF2 Media in 2018, and loves working with everyone on the team because not only does it promote women's roles in films, it also opens her up to more works done by women. Sophia is so glad that there is a space that is full of women alike in their passion to bring more attention to females who are just as capable or even more capable than men in the industry.
Previous Post Next Post