Brooklyn performance artist Narcissister combines her own stage performance work with graphic animation and her brother’s home videos to explore the nature of her parent’s relationship and familial history as it lives on in her life and work. The result is the fascinating and emotional piece of art documentary, Narcissister Organ Player. (HRM: 5/5) 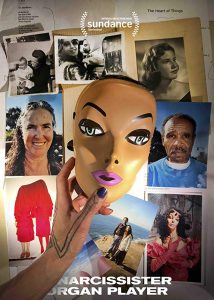 Directed by Narcissister herself, Narcissister Organ Player is far beyond a simple look at the artist and her work and process. The film is made up of a combination of home videos her brother began to film when their mother’s health began to deteriorate, family photos, and dramatic stage performances featuring narcissister and other masked dancers.

The film focuses mostly on her own relationship with her mother through her own artistic lens. A narration by Narcissister talks us through her family’s past and her own experience growing up with her mother and father, often falling into a poetic, almost musical chant that transports the audience into her childhood memories. 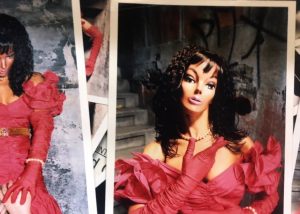 The performances she incorporated into the film are not far in style from her previous work, which has been deemed everything from kitschy pornography to hypnotic dance. Narcissister has never limited the physical potential of her body, which she says is due to the closeness she felt with her mother’s body. This principle shines through in her outrageous yet powerful dramatizations. Juxtaposed with the home footage, the deeper theme of the film is revealed: the physicality of the mother daughter relationship.

Although she has never been afraid to show every bit of her body, Narcissister Organ Player feels as if the artist opened her chest and gave the audience her heart. To say it’s revealing would be an understatement. As a viewer I saw myself and my own experience reflected in her art and was able to freely explore my relationship with my mother on a level I had not experienced before. I am deeply grateful to Narcissister for creating such an honest piece of work. The film is beautifully made, deeply emotional, and a true piece of cinematic poetry.

Yes! It is very much a beautiful celebration of the mother-daughter relationship and does not follow the patriarchy at all.

My Days of Mercy Tackles the Death Penalty, Lesbian Love, and Grief