Written by Tawni O’Dell and Adrian Lyne, Back Roads is a directorial debut from director-actor Alex Pettyfer about a young man who is left to take care of his crumbling family. Based on the novel of the same name by O’Dell, a mother goes to jail for killing her husband, leaving her son to make a living and care for his three younger sisters. (KIZJ: 4/5)

A distraught young man, “Harley Altmyer” (Alex Pettyfer), sits handcuffed in a stale interrogation room. With a mixture of blood, tears, and sweat across his face, Harley remains silent as the police officer repeatedly asks him “why [he] kill[ed] her”.

We’re taken to a time that is two years prior, and Harley has just driven home from one of his two jobs. He sees two of his sisters, the tweenager “Misty Altmyer” and the youngest “Jody Altmyer” (Hala Finley), but not the third. The rebellious “Amber Altmyer” (Nicola Peltz) has gotten herself a date. She is blasting music, wearing a short denim skirt with no top, and her platinum blonde hair scream attention and annoyance. She is supposed to take care of the kids tonight, but when Harley questions her, she rebuts with typical teenager attitude. 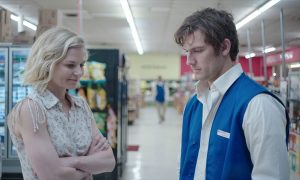 Harley pulls up in front of “Robinson’s Grocery” and starts his evening shift at the store. At work, he runs into Jody’s friend’s mother, “Callie Mercer” (Jennifer Morrison), a beautiful adult from the neighborhood who escaped the kids for the night by running to the store. During that night at home, Harley is woken up by the sounds of a girl coming from downstairs. He grabs the rifle to see who the intruder is, but upon realizing it is Amber with her date on the couch, he goes outside and shoots weapon to scare the two into stopping. He drags the couch outside and lights it on fire. The other two sisters watch from the window. This is the first of many instances that begin to reveal the complex relationships between the family members and where they stem from.

Tawni O’Dell and Adrian Lyne’s adaptation of Back Roads is an ambitious take on the dark family drama. It tries to paint a gloomy picture of a family that’s torn apart by complicated interpersonal dynamics. Despite the strong opening, the dialogue for much of the rest of the film is wordy and stretches each scene to longer than necessary. Yet, the characters created give the actors a great opportunity to showcase their acting abilities. As portrayed by the great cast, the acting is definitely one of the highlights of the film. Alex Pettyfer is fantastic in the role of Harley, and Nicola Peltz is spot on as Amber—the rebellious teenager who is coping the only way she knows. Of course the other two remaining Altmyer siblings cannot be omitted, with Chiara Aurelia as Misty, and Hala Finley as Jody, these young actresses show a lot of potential by taking on such complex characters.

Individually, each scene has very strong visuals thanks to the production design by Margaux Rust. The rusty truck and the protagonist’s home contrasts greatly with the rest of the world around them. Despite being so close to the rest of the world, the family is stuck in this hopeless rut. For a directorial debut, this is a piece from Pettyfer that is promising of future works. The film itself tackles difficult subject matters of abuse, violence, and the socioeconomic consequences that come in the aftermath. Each character is buried in a deep vicious cycle of intertwined confusion between attachment, violence, jealousy, and love. When the only form of love you know is attachment, at whatever expense, how do you learn to distinguish between the right and wrong ways to love?

Does Back Roads pass the Bechdel-Wallace test?

Yes, when “Bonnie Altmyer” (Juliette Lewis) is visited by her daughter “Jody Altmyer” (Hala Finley), they talk about the other girls back home who did not come to visit.