Based on a true story, On My Skin is the haunting death of Stefano Cucchi, killed after being arrested for a minor crime. The film explores the week he spent in custody and attempts to give an explanation of his psyche before his tragic death. (KAC: 4.5/5)

Directed by Alessio Cremonini and co-written with Lisa Nur Sultan, On My Skin recounts the week Stefano Cucchi spent in police custody before his unexpected death. After being arrested for a petty crime, Cucchi was beaten by a few police officers and died from his injuries. He was one of approximately 175 people who died in Italian police custody in 2009. The story of his death resulted in public outcry and led to an investigation into police violence against those in custody in Italy.

Stefano Cucchi’s life and death was a huge story in Italy, but less so in the United States. This film works hard to share his story with new audiences while also not rewriting the story to do so. Cremonini and Nur Sultan present the moral issues unbiasedly; they don’t hide or explain Cucchi’s negative traits or actions. The story and direction force the audience to question the treatment of prisoners in every sense. What makes the film all the more interesting is that it doesn’t try to answer any of its questions. Cucchi doesn’t always say or do what seems ‘right’ and the complexities of the ‘what if’ moments constantly arise.

The film would be nothing without the brilliant acting of Alessandro Borghi. He has an ability to pull us in, yet keep us just far away enough. Every thought that the real Cucchi actually had is hard to know and Borghi works with what is already known to shape the character. His ability to be so full of an emotion that is so unreadable forms a complex empathy for Cucchi. Being in the audience, I could see the inevitable ending (it doesn’t hurt that this is presented within the first 10 minutes of the film), but I couldn’t see where Borghi would take it next. He created a new sort of suspense, not one following the plot, but one following just the emotions of Cucchi.

The beauty of the cinematography and set design do a lot to press the film forward as well. The frame holds Cucchi tight, not wanting to miss a thing, and by the end, leaves us yearning for him to be back, to be seen. Every moment is well crafted, yet simple. Nothing is over complicated; it presents life as it was, using the camera only to shape your view. Every piece of design feels intentional, while not distracting from Cucchi. The beauty of the film feels heartbreaking; a few moments feel reminiscent of Christ in a Renaissance painting.

Cremonini and Nur Sultan frame Cucchi’s story as one that will shape Italy and its jail practices. Despite being one of many, Cucchi is an important figure thanks to the work of his sister, Ilaria Cucchi. The film does a great job capturing the last days of Cucchi and the feelings of helplessness he felt. The film is now in theaters at the IFC Center in New York City and is streaming on Netflix. This film and its subject deserve recognition. 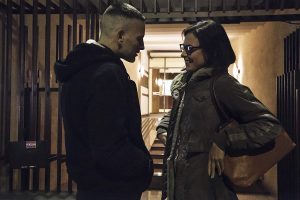 Middle Photo: Cucchi before being beaten.

Q: Does On My Skin pass the Bechdel-Wallace Test?

The story is about Stefano Cucchi and despite including his mother and sister, they only talk about him throughout the film.