Thoughtful satire ‘Isn’t It Romantic’ is a guaranteed laugh 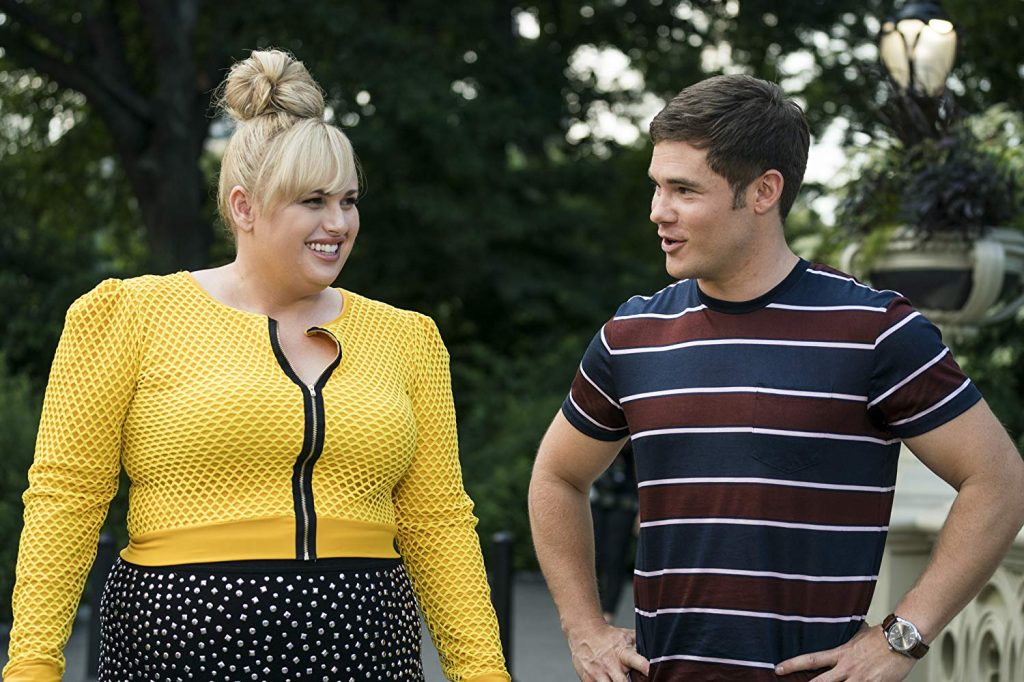 Written by Erin Cardillo, Dana Fox and Katie Silberman, Isn’t It Romantic is a satire about an Australian architect who is knocked out and wakes up in her own romantic comedy. Though its purpose in satirizing the genre of rom-coms is somewhat unclear, the satirical recreation of wildly unrealistic rom-com tropes is pretty much guaranteed to make you laugh. (JRL: 3.5/5)

‘Isn’t It Romantic’ opens on a young Natalie (Alexandra Kis), glued to a TV screen and hanging on to Julia Roberts’ every move in Pretty Woman. Her mother (Jennifer Saunders) enters the scene with an ice cream float made with boxed wine to burst her bubble, asserting that “Life’s not a fairy tale” for women “like us.”

Flash-forward twenty years, and Natalie (Rebel Wilson) is an architect living in New York City. At the office, her coworkers push her around and subject her to annoying tasks outside of her job description. The worst is the firm’s new client, Blake (Liam Hemsworth) who is, unfortunately, what Natalie describes as “CW hot,” and who mistakes her for an intern who is there to  get him coffee. But it’s not all bad for Natalie in the office; she has a quirky assistant named Whitney (Betty Gilpin) and an adorably eager coworker named Josh (Adam Devine) who’s clearly keen on her, though she’s too insecure after so many comments like her mother’s to see it. Actually, Natalie harbors a cynical attitude about all things love, especially the romantic comedies that constantly grace Whitney’s computer screen.

Then one day, after bravely fighting off a mugger on the subway, Natalie runs headfirst into a pole which knocks her out. She wakes up, to her confusion, in a pristine hospital room with flowers on the side table and a doctor who’s so gorgeous he looks like an actor playing a doctor in a movie (can you see where this is going?). As she returns from the hospital, she is further dumbfounded by the world she’s walked into: the little corner stores and bodegas don bright pastel paint jobs, her small apartment has expanded into an immaculately decorated loft, and Blake (the condescending client from earlier) is instantly smitten with her when he runs into her on the street. As a perfectly-timed flash-mob breaks out behind her and a beeping truck conveniently bleeps out all of her expletives, Natalie realizes what’s happening: she’s woken up in a rom-com.

This may sound like heaven to some, but the already cynical Natalie is

desperate to escape this alternate world and, as it turns out, the only way to get out of a romantic comedy is to let its storyline play out. What ensues is a grand adventure for love in true “romantic comedy” style.

When it comes to Isn’t it Romantic, the devil’s in the details. It’s clear that director Strauss-Schulson put meticulous effort into every moment to fully execute the film’s satire. Some of my favorite moments include a subway map shaped like a heart and Natalie’s “NYC” t-shirt as casual wear. Though the overall plotline and gimmick of the movie is funny, to me what sells its comedy are these details that catch you at every twist and turn.

Speaking of details, I also must applaud set designer Alyssa Winter for perfectly crafting a rom-com version of New York City, which stands in stark contrast to the film’s brutally honest portrayal of the real city. Though the bright colors and conveniently unbranded flower shops and food trucks are meant to satirize the unreality of the worlds rom-coms create, I found them quite visually pleasing all the same. Perhaps this is the point: to make us aware of truly how deep the escapism of rom-coms is for its audience, right down to the unrealistically pretty storefronts and bodegas.

Rebel Wilson, who’s usually subjected to the role of Funny Side Character, takes on her newfound spotlight with grace. She delves into physical comedy, pulls exactly the right face in every situation, and even shows her musical chops in more than one musical number. I really hope to see more films with Wilson at the epicenter, because Isn’t It Romantic has proved that she is more than capable.

Though it’s definitely funny, the problem with Isn’t It Romantic is that it’s satire, but for what reason is unclear. Satire exaggerates certain topics in order to critique them, and while Isn’t It Romantic certainly exaggerates every trope of rom-coms there is, rather than critiquing the genre it seems to end up utilizing these tropes for the same escapist qualities it protests. *Spoiler alert*: at the end of the film, Natalie gets the guy, excels at her job, and possesses essentially everything she’s ever wanted. Of course, even this is a self-conscious reiteration of the too-neat conclusions of normal romantic comedies, but because of that it fails to adequately address and correct the real issue with rom-coms: that they set up unrealistic expectations for love and life (and women’s appearances!), only making the reality of these things harder to deal with in real life.

Still, ‘Isn’t It Romantic’ is light-hearted, fun and pretty much guarantees a good laugh. Plus, the fact that Adam Devine and Rebel Wilson are reuniting for another film is… pitch perfect. 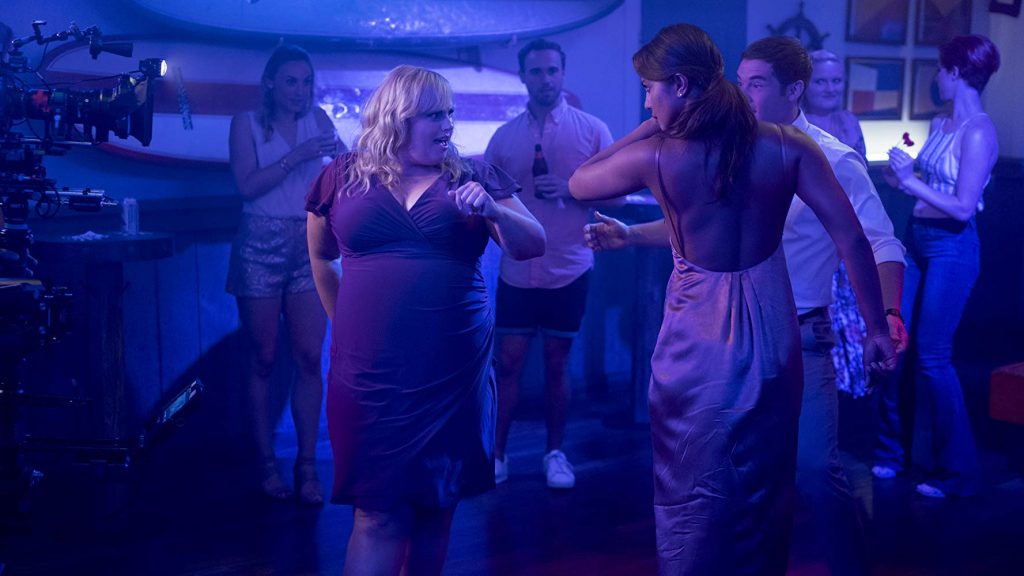 Q: Does ‘Isn’t It Romantic’ Pass the Bechdel-Wallace test?

A: Yes! There is a very funny conversation between Natalie and Whitney about the pitfalls of romantic comedies.

I am not a fan of romantic comedies myself, so for me the exposition in Isn’t It Romantic didn’t just briefly set up tropes before subverting them; in some cases it was my only cue that there was a trope to be subverted in the first place! Even with this level of knowledge about the genre, though, I found this movie to be a delight! I agree with Julia that there wasn’t a strong reason for it to exist, though. What Isn’t It Romantic is saying about romantic comedies has been said over and over by many other films, and while Isn’t It Romantic does its job well, I would have loved for some new ideas to be added on. For instance, Rebel Wilson’s big epiphany at the end is just to love herself–it’s not like we don’t need reminders to love ourselves in our self-hate-inducing society, but there seemed to be some originality missing in that moment.

Another issue with the movie is that it, like most romantic comedies, includes mostly white characters. I’m pretty sure there was only one character of color in this movie, an MTA worker who is fixing a card machine at a train station when Rebel Wilson wanders in trying to get back to her own world. Two of this worker’s four lines are simply “You’re crazy as hell!” The line is delivered in just about the way you would expect. Considering that our society’s cultural messaging about beauty ideals makes self-love even more difficult for women of color, you would think a movie about self love could have touched on that.