Saccharine, sappy, and sentimental, Five Feet Apart is a tale of love in the time of cystic fibrosis. While I am not the kind of person typically targeted by romantic comedies and therefore need to give both rom-coms and YA movies a certain benefit of the doubt in this review, I still have to say that I thought this movie was ridiculous. (GPG: 1/5)

Five Feet Apart revolves around two cystic fibrosis patients who meet in a hospital and, in true romantic comedy fashion, reluctantly become friends after initially being turned off by their oppositional personalities. It’s very much like The Fault in our Stars, in the sense that there’s a spunky young girl, here named Stella, who is struggling with a terminal illness; while she has one attitude about her terminal illness (optimism), she by chance meets a witty hearthrob who has the opposite view toward it (pessimism). In The Fault in Our Stars, Hazel Grace is pessimistic about cancer while Gus is optimistic, but Five Feet Apart is in most other senses the same damn movie.

The aesthetics of Five Feet Apart aren’t very original either, since the film is mostly uninspired TV-drama style coverage of scenes that could literally be from a John Green book. I also have a bone to pick with the score, which seems to be this ultra-generic piano-and-light-synths affair that sounds like stock music clips from PremiumBeat.com, though fortunately they remembered to buy the versions of the songs where there isn’t a voice every fifteen seconds saying “PremiumBeat.com” to let you know the song comes from PremiumBeat.com. And no, this review is not sponsored by PremiumBeat.com. 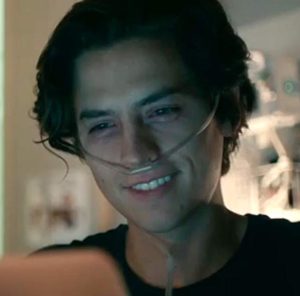 Another thing about Five Feet Apart is that Will will literally just threaten suicide in front of Stella to manipulate her, but then we’re supposed to be like “oh no, he’s so tortured and sad!” Will’s whole deal as a character is that he’s reacting to his cystic fibrosis by acting out and taking risks so that he can feel alive again, but it doesn’t really work for me—and while it’s supposed to be seen by the other characters as immature, we all know the fangirls are out there buying whatever Cole Sprouse is selling, so the film’s opinion on Will probably doesn’t mean much to the audience. My main takeaway from his character is that if he saw a therapist instead of getting into a relationship with some unsuspecting girl who doesn’t need his drama, the whole world might be better off.

My final beef with this movie is that Stella has the exact same disease as Will, but she seems to manage just fine without utterly rejecting her sense of responsibility to act like a damn adult. We all deal with tragedies in our own ways, but Will is definitely dealing with his in the worst way possible, and I just need to put that out there.

Yes! Stella has a nurse who she’s close with and makes lots of jokes to.

Middle Photo: Cole Sprouse doing essentially the same face as before, but this time at a computer.