Written by Prune de Maistre and William Davies, Mia and the White Lion is the story of a girl who forms a lifelong bond with a beautiful white lion and then must fight to save him from the evils of animal poaching. Mia and the White Lion is not only an engaging narrative about a girl and a lion, but also an activist film, fighting the pertinent poaching industry of South Africa. (JRL: 3.5/5)

Mia and the White Lion Fights Animal Poaching Alongside its Protagonists

At the beginning of Mia and the White Lion, Mia (Deniah De Villiers) has just moved from England to South Africa with her mother, Alice (Mélanie Laurent), her father, John (Langley Kirkwood) and her older brother (Ryan Mac Lennan). Alice and John plan to open a lion farm to breed and sell lions to other businesses. As Mia’s parents show her around her new world, it seems like a perfect oasis with majestic wildlife like elephants and giraffes roaming free. However, Mia is struggling to make friends at her new school and frustrated with her parents’ decision to uproot her life, so she’s unable to appreciate her new habitat… until her father presents a little white lion cub, Charlie, on Christmas morning. Though Mia’s teenage angst prevents her from befriending Charlie at first, the lion cub is instantly enraptured with her, following her everywhere and rousing her to play. Eventually he wins Mia over and the two become inseparable.

However, complications soon arise with the friendship. As Charlie gets bigger and his primal instincts begin to kick in, Mia’s parents fear for her safety. Mia tosses off their concerns, claiming that the rules for handling lions, like never turning your back on one, do not apply to her and Charlie… as she stands with her back to him. This is because their relationship is built on “love and trust,” she says, as Charlie rears up behind her in what seems like an attack but proves to be a playful gesture. Mia’s parents, still unconvinced, separate Mia and Charlie with a fence and forbid Mia to make contact with him. Of course, Mia evades these rules and the friendship continues to grow.

Then, in a terrifying twist, Mia discovers that her father is knowingly selling his lions to animal poachers. She realizes that Charlie, a beautiful and rare white lion, is next. Mia must find a way to save Charlie from the poachers and let him live out the life he deserves.

A strong aspect of Mia and the White Lion was its portrayal of family. Though on the surface the film seems to be about the relationship between a girl and an animal, it actually centers around Mia and her family, whose relationship is strained by Charlie’s existence. No family member is perfect, each exhibiting shortcomings and missteps, but each clearly doing what they think is best for themselves and the family. For most of the film, the family isn’t quite able to align in harmony when it comes to Mia, Charlie and all of the lions though they’re all trying, and I think this is poignantly realistic.

I was also (and I can’t believe I’m saying this sentence) really impressed by the lion’s performance. I was completely enraptured by animal actor Thor’s face. He beamed with joy in his happy moments and melted into genuine sadness when things got dark. There was apparently no use of CGI, which, in my opinion, makes this performance absolute magic. In my research I discovered that in order for De Villiers to be safe handling Thor, the two of them had to form a bond over several years. This means that the friendship we see on screen is a genuine one, making the scenes between the two of them even more astonishing.

However, this film really delivers mixed messages about wild animals, especially as it is marketed to impressionable young audiences. Lions are framed as entirely benign as long as you love them and make friends with them, which ignores the reality that these are primal creatures who, when presented with a child, might not be as friendly as Charlie was. Mia’s parents, who exhibit rightful concern for her safety, are framed as villians for separating the two of them. I implore audiences to take this narrative with a grain of salt and realize that, while lions deserve to be protected from poachers, they probably should not be people’s best friends.

I still applaud the attempt to use film to create change. Mia and the White Lion ends with shocking statistics about animal poaching in South Africa that really hit home in the context of the love story between Mia and Charlie that we’ve just seen. If viewers are able to take the correct things away from this movie (ie. that beautiful lions are in danger and we must save them, not that lions are good friends), it could really have a profound impact on the course of the poaching industry. Q: Does Mia and the White Lion pass the Bechdel-Wallace Test?

A: Yes! There are many conversations between Mia and her mother about Charlie (and yes, Charlie is technically male, but he is not a man so it still counts). 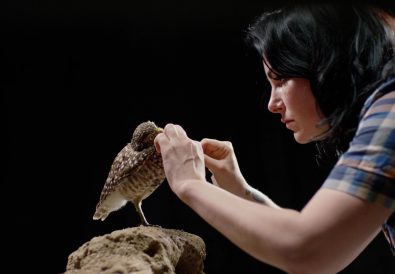