‘Love, it’s the new style’: The Triumphant Sweetness of the ‘Fiddler’ Documentary

In Fiddler: A Miracle of Miracles, writer-director Max Lewkowicz and writer Valerie Thomas illuminate the rich history behind the classic musical, unpack its artistic influences, and explore the sources of the story’s universal power. (AEL: 4.5/5)

In one of my favorite sequences in the documentary, many Tevyes are spliced together: they come from the film version, several stage versions, from performances on TV variety shows or concerts. They splutter “If I Were a Rich Man,” in English and Yiddish and Japanese, and their exaggerated frustrating is instantly recognizable across cultures.

Fiddler on the Roof’s writers were inspired by a set of stories by Sholem Aleichem. The writers were originally interested in Aleichem’s novels of Jewish village life under Imperial Russia at the turn of the 20th century, and had seen in these depictions a world they wanted to bring back to life. They chose to build their musical on a character named Tevye, a dairyman, who had the misfortune of five daughters (and no sons).

The Anatevka of Fiddler is Alecheim’s harsh village, only a bit brighter: in Boris Aronson’s original set design, the close-knit homes appear playfully pressed together, and in the original staging, villagers move in close circles representing a longstanding history of unity. In a bit of selective nostalgia, or perhaps knowing reimagining, some of the characters representing the real town’s darkest influences are funny and sweet onstage: Yenta, the matchmaker, sets the daughters’ grim futures in a few comedic verses; a Russian constable, a force of an intolerant empire on the village, is bumbling and sympathetic. In original Broadway director-choreographer Jerome Robbins’s staging, every member of the circle gets a name.

The film moves swiftly through the political contexts of the musical’s conception: the social unrest of 1960s New York, the civil rights movement, revolutions in gender and sexuality, the paranoia and pain of anti-Communist government crackdowns. In its most recent 2015 revival, Fiddler felt like a searing commentary on refugee crisis and anti-immigrant rhetoric. The conclusion is clear, as Lin Manuel-Miranda articulates it in one of his interviews: no matter the moment of the production, consistently over decades, people see this play and feel it speaks to their time, to their specific forms of intolerance, displacement, and resilience.

The documentary’s most striking moments simply illuminate the poignant themes at the center of the musical’s plot: the push and pull between father and daughter, between tradition and change. The musical’s driving force is Tevye’s three eldest daughters, whose marriage choices become progressively more difficult to accept for their parents’ traditional values.

The musical favors neither older nor younger perspective, and instead moves strategically between the two. In “Matchmaker,” we see the three daughters realizing that the institution of marriage for which they’ve prepared their whole lives is actually frightening and uncertain. In “L’Chaim,” Tevye celebrates what he thinks will bring his daughter great happiness, because it is, traditionally, perfect.

As Tevye’s second daughter, Hodel, leaves the village to be with someone she loves who is in trouble, she sings to him about something she knows she’ll never “make him understand.” Chaim Topol, the actor who played Tevye in the 1971 musical film, describes that scene as something he thought about for years, and he gets emotional in his interview just remembering it. In a particularly moving sequence, one of the interviewees talks about the third daughter Chava, who has chosen to marry outside the Jewish faith. As the interviewee explains, Chava forced a weary Tevye to proclaim her “dead,” and closed a door she “didn’t realize could close.” In the most recent Broadway revival, Chava pleads with her father as he pulls a blue scrim down over her, barring her permanently from her home.

The lasting energy Fiddler produces is evident in the impressive array of interviewees involved in the project, either through old footage or new exclusive contributions. The play’s original book-writer, lyricist, composer, and producer all appear. Academics and writers share what inspired them about this story, and hint at the many more layers and histories it holds. A number of actors contribute to this film, among them daughters from the 2015 revival Melanie Moore and Alexandra Silber, the son of the original Broadway Tevye, Josh Mostel, and a Broadway Golde, Jessica Hecht. We get the treat of seeing the concertmistress in the pit, Kelly Hall-Tompkins, who supplies the haunting solos for the fiddler onstage. It is unclear at first why Lin Manuel-Miranda is present (except for his general authority when it comes to musicals, and his special love for Fiddler), until we get to see a home video of his wedding, where he and his wife’s father staged a surprise performance of “L’Chaim” for a tearful bride. 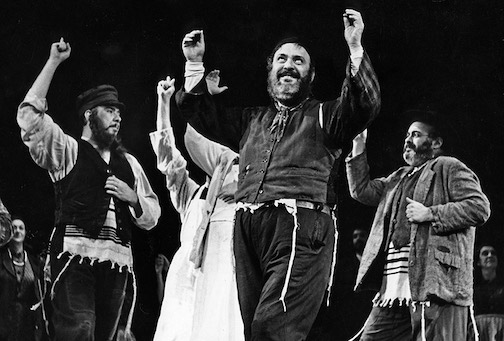 Through this collaborative energy, the documentary celebrates the musical’s universality. In the years soon after the play’s first run in the 60s, a cast of predominantly Black students performed the play at their elementary school, and over protests by members of their neighborhood about “disrespect” to the Jewish Eastern European tradition, the students performed the story with passion, honesty, and appreciation. Miranda recalls an audience member from a performance of Fiddler in Japan remarking: “Do Americans understand this? It’s so Japanese!”

The Anatevka of Fiddler on the Roof is a lost world, and not a particularly happy one. (One of the interviewees, a professor of Jewish history, explains that looking backward to the Jewish villages in Eastern Europe is a complicated kind of nostalgia, since people emigrated from there because they were being killed.) Yet, as the documentary posits, the world in the musical is one of joy and dignity, where characters are very close to the meaning of God and family. The documentary is also funny and clever, and it makes me want to go and watch the musical again, which I’d say is the best thing such a documentary can do.

by Amelie Lasker August 23, 2019
Amelie Lasker joined FF2 Media in early 2016 after graduating from Columbia University where she studied English and history. She has written plays and had readings for Columbia’s student-written theatre company Nomads, edited the blog for Columbia’s film journal Double Exposure, and worked on film crews and participated in workshops at Columbia University Film Productions. She spent junior year abroad at Cambridge University, where she had many opportunities for student playwrights to see their work produced.
Previous Post Next Post