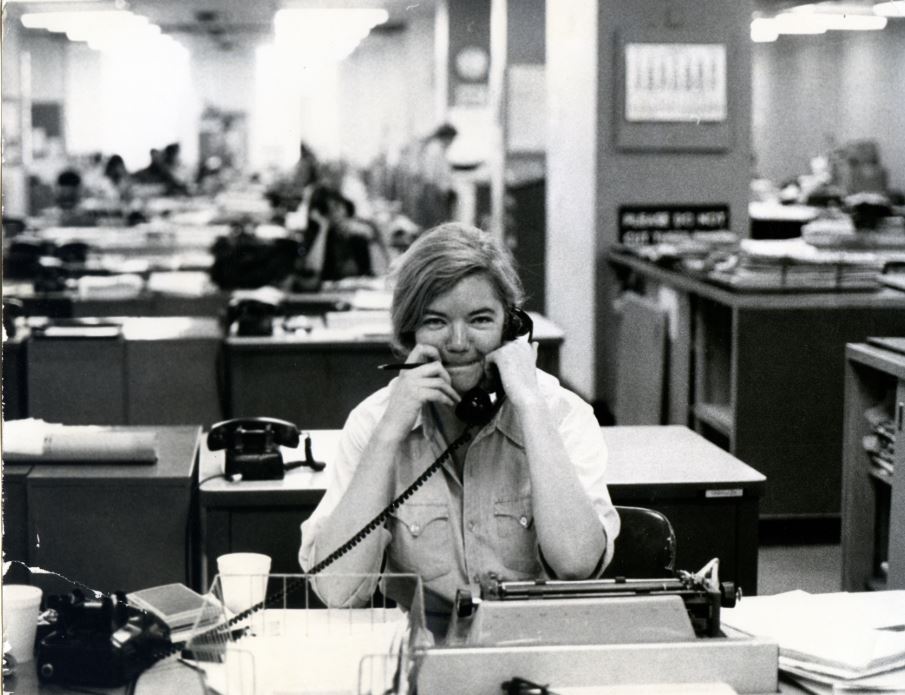 Whether you were an avid viewer of hers during the Bush era or (like me) spent most of the Bush era learning your multiplication tables, Janice Engel delivers an overview of Molly Ivins that will charm, tickle, and at times chill any blue-team resident of the year 2019. However, it seems like Ivins became a sensation without solving any of the left’s major problems re: political discourse. (GPG: 4/5).

While Raise Hell is unable to include an interview of the late Ivins herself, enough interview footage of her is shown that it almost feels like this is not the case. Ivins’s voice is so present throughout the film that the viewer can easily tell why it was this strong personality who held her own against the right-wing mania of the Bush era. The sheer volume of withering take-downs in this film will make you wonder that the religious right’s faces didn’t all melt off like at the end of Indiana Jones and the Raiders of the Lost Ark. If Ivins existed in the age of Twitter, she would have ruled the platform during the Trump presidency–in fact, after seeing this film I can’t help but imagine Ivins and Trump getting into a Twitter firefight, ending with him blocking her.

Ivins had about as much gumption as you can imagine existing within one person, and by all accounts she needed every ounce of it to make it in the world of journalism at a time when women mostly just ran the “lifestyle” section. Even if you disagree with everything I’m about to say below this paragraph, we can surely agree that a tenacious woman like Ivins deserves respect for her accomplishments.

There were a few aspects of Ivins as a journalist, though, that raised my eyebrows–though apparently not the film’s. There is little critical discussion of Molly’s friendly association with the Texas lawmakers who outlawed being gay in that state in 1993 by making “sodomy” illegal. We are treated to her dry comment that now that sodomy was illegal, two of the foremost Texas Republicans could not high-five over the issue, because “it’s illegal for a prick to touch an asshole in this state.” However, aside from that joke, we are left in the dark about whether she took any of these men to task for this horrific law when she met them after the vote for a beer.

This is where one Trump-era issue that didn’t get much airtime in the Bush era makes the triumphalistic portrait of Ivins more complicated. In an era where most mainstream liberal news programs are in fact comedy shows, it’s become clear that making jokes at people like Bush and Trump does not make them stop. Even if Jon Stewart returned from retirement as Gandalf the White, he wouldn’t be able to counter the fact that ridicule from the left stopped neither Trump nor Hitler. That, and the impossibility of “journalistic objectivity” that Ivins herself was among the first to acknowledge, has roused debate on the role of journalism in activism (among those who believe any of what I just said, anyway). If Ivins were around today, would she confine her politics to Twitter, or would we have seen her on the ground showing up for Black Lives Matter and the Dakota Access Pipeline protests?

This film also made it clear to me why millennials advocate against free speech for fascist alt-righters while the older generations are so leery of that issue–the Bush era’s censorship, which many of us don’t remember completely, are what makes the need for de-platforming fascists into a generational issue. We’ve seen from alt-right whiners like Milo Yiannopoulis that the right loves to co-opt the left’s language, meaning that as soon as the tables were turned they would use whatever anti-fascist policy put in place against them for their own advantage. However, this is a problem of logistics, not principle. History shows what happens when a liberal democracy allows fascism into its public discourse, and now the present is showing us as well. Ivins, with her love of free speech, would most likely have been on the old-guard’s side when it comes to this issue.

While the logistics of shutting up Nazis is one thing, I wonder if Ivins would have participated in the hypocrisy we see from many liberals regarding protests on the left. Would Ivins have scolded Black Lives Matter protesters for breaking a window or two? On this issue, I’m unsure. A Texan like Ivins makes it repeatedly clear that she’s all for people taking their conflicts into their own hands; Ivins might well have saluted the BLM freedom fighters, though she still might have been too busy getting a beer with Mitch McConnell to go help them out in person.

From the run-down of Trump-era issues I just gave, we can see that Ivins wasn’t completely in line with any of the commonly adopted ideological lines we tend to see on the political scene these days. The wealth of conversations it provokes on topics of all kinds are more than enough reason to go see this film, and the chilling fact that many of these issues are still present in different forms on the political stage of 2019 provides a more sobering reason Raise Hell is important.

Since this film is a documentary, it doesn’t have “scenes” or “characters” in the sense that the Bechdel-Wallace test would require. However, a documentary that gives both Molly and her female colleagues plenty of time to speak certainly deserves an honorary mention!

Seberg: A tribute to the French New Wave actress’s legacy

by Giorgi Plys-Garzotto September 3, 2019
Contributing Editor Giorgi Plys-Garzotto is a journalist and copywriter living in Brooklyn. She's been thrilled to step into an editing role at FF2 after writing as a reviewer for years, so you may see her writing at the bottom of intern's posts as well as in her own pieces! She especially loves writing about queer issues, period pieces, and the technical aspects of films. Some of her favorite FF2 pieces she's written are her review of The Game Changers, her feature on Black Christmas, and her interview with the founders of the Athena Film Festival! You can also find more of her work on her website!
Previous Post Next Post