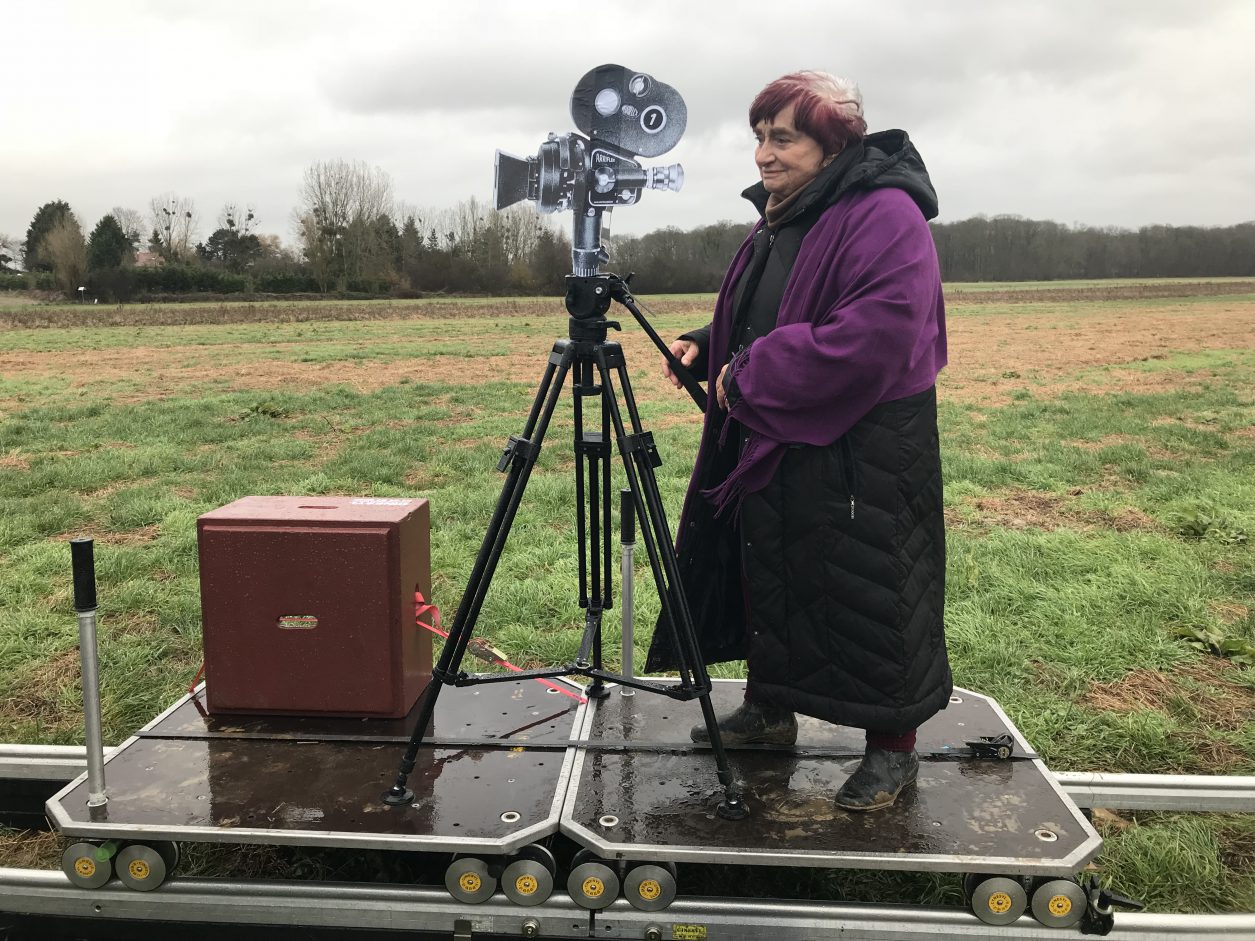 Varda by Agnès is a retrospective composite of interviews with legendary French filmmaker Agnès Varda and clips of her films that span the beginning of her career to her final creative endeavors. Varda by Agnès is an exquisitely beautiful portrait of an artist that has done so much for the film industry and acts as a wonderful bookend to a marvelous and long-lasting career of filmmaking, film writing, exhibition, and, in her own words, “inspiration, creation, and sharing.” (DLH: 5/5)

Varda by Agnès begins with Varda herself speaking to a crowd in a theater. She sits in her typical director’s chair and talks about why she makes films. These scenes of Varda speaking to different audiences recur throughout the film and anchor us back in real-time. We see the artist herself, intercut with images of her life’s work through various different film projects, outtakes, final scenes, and exhibits. These clips of her previous films are extremely well-chosen. Not only does she guide us through a tour of her many popular hits (Cléo from 5 to 7 and Vagabond), but she is also shameless about showing her biggest flops and relatively unseen films (One Hundred and One Hundred Nights and L’Opéra-Mouffe).

Varda’s wit and whimsy in the interviews and discussions also move into the editing in Varda by Agnès. When she speaks about the long tracking shots in Vagabond, we move directly to present-day Varda being pushed along on a dolly in a heavy winter coat as she continues the conversation. When she speaks about Beaches of Agnes, we see her walking on the beach with children setting up cardboard pigeons to keep her company. These touches add something particularly wonderful to Varda by Agnès; there is a distinct sense that her career did not end with her big films, but that this retrospective of her own career is just the next piece of her legacy.

Even more, Varda by Agnès in itself contains many of the themes and recurring principles of her previous films. She consistently explores juxtaposing images, the nature of time, and the extraction of the extraordinary from ordinary people in her interviews as well as in the clips she has inserted into the film. Varda by Agnès tackles all of Varda’s cinematic explorations in one neat little package but still manages to feel concise and well-paced. Despite having so much material to put into a single film and the unfortunate fact that Varda was nearing the end of her life, Varda by Agnès never feels rushed. Every element felt intentional and warranted.

I’m not sure what was better, hearing Agnès speak firsthand about the intentions of her work (much of which I have intensely studied and analyzed), or reliving my own experiences of watching many of her films for the first time. The wonderful thing about Varda by Agnès is that it offers a taste of her distinct filmmaking style for those that have never seen her films, and simultaneously encourages those that have seen everything to go back and watch it all over again.

Still, the most amazing thing about Varda by Agnès is Varda’s ability to seamlessly transition between the past and the present. The cheeky edits, beautiful pacing, and the integration between film projects, photographs, and exhibitions make Varda by Agnès a perfect film in its own right, and a final nod to the stunning career of an artistic legend. Repose en puissance, Agnès.

Does Varda by Agnès pass the Bechdel-Wallace test?

Of course! There is a particularly memorable scene where Agnès speaks with Sandrine Bonnaire about their relationship during the filming of Vagabond.

A quick FF2-related note in regards to Varda by Agnès :

Jan and I discussed just how much Varda’s guiding principles of “inspiration, creation, and sharing” resonated with us personally and with FF2’s mission. The filmmakers (and particularly such an amazing one like Varda) supply us with inspiration and creation and it is up to the audience to complete the equation with sharing. There is a poignant scene in Varda by Agnès where she mentions that an empty theater is a filmmaker’s worst nightmare. She then flashes a quick image of the theater she was speaking to a crowd in, completely empty, with just the red velvet chairs staring back at her. It is so increasingly important that there is an audience to support women filmmakers, and Varda drives this point home in Varda by Agnès.

by Dayna Hagewood November 21, 2019
Dayna graduated from Rutgers University in May of 2019 with a degree in English and Cinema Studies and a concentration in Creative Writing. Dayna loves working with FF2 Media because writing about film harmonizes her greatest interests and allows her to participate in showcasing women artists doing amazing work. As a writer, film buff, and avid cross-stitcher, Dayna appreciates that FF2 carves out a space for women artists in an industry so unwilling to lend one to marginalized groups. She is proud to aid in creating and facilitating that necessary space.
Previous Post Next Post